Permafrost, defined as sub-surface earth materials that remain at or below 0˚C continuously for two or more years, is widespread in the Arctic, sub-Arctic, and high-mountain regions, and in ice-free areas of the Antarctic and sub-Antarctic. An area can have continuous, discontinuous, sporadic, or isolated permafrost, but the only metric used to truly identify an area of permafrost is temperature. Except in high-altitude regions, such as mountain ranges, a general rule is that the frequency and thickness of permafrost decrease as proximity to the equator increases. In the Northern Hemisphere permafrost regions cover approximately 23 million km2, an area nearly 2.5 times that of the continental United States. Actual land area underlain by permafrost occupies between 12 and 17 million km2 (Brown et al., 1997; Zhang et al., 2000). About 80% of Alaska covered by permafrost, and the entirety of bare ground on Antarctica covered by permafrost.

The uppermost layer of seasonal thawing is termed the “active layer”. Seasonally frozen ground combined with intermittently frozen ground occupies approximately 54.4106 km2, or 57% of the exposed land areas of the NH and includes the active layer over permafrost and soils outside the permafrost regions (Zhang et al., 2003). About half of the United States experiences seasonally frozen ground to some extent; ranging from depths of about 10 inches in the mid-west to about 40 inches in north-central states, and reaching more than 60 inches below the surface annually in the highest latitude regions, such as northern Minnesota. 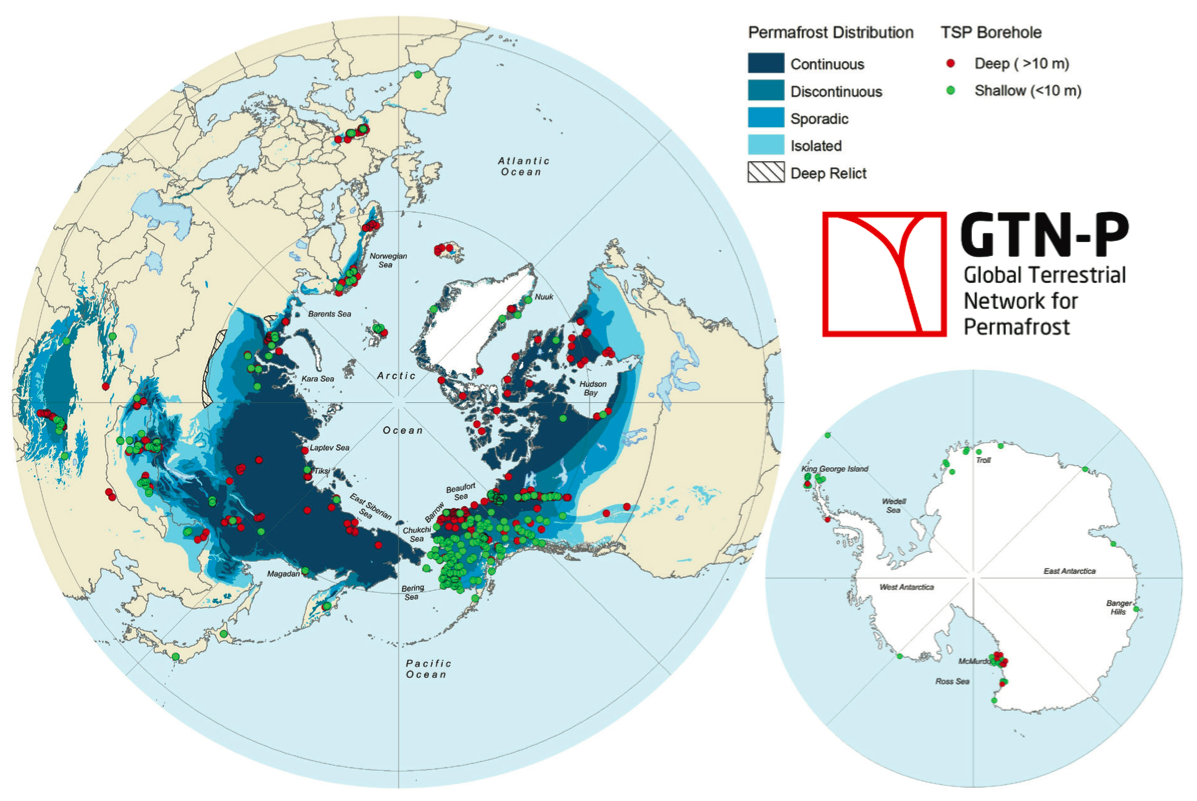 Permafrost and its processes have a significant impact on the land it covers. In turn, the land covered by permafrost has a significant impact on the thickness and extent of permafrost. For example, in areas of the Arctic with permafrost and active layers, peat plays a vital role in the transfer of heat to and from the ground. Peat is a type of soil that forms when dead plants do not fully decompose, and helps the ground beneath it stay cold, as frozen ground or permafrost. Other types of soils, plants and other vegetation, snow, slope of the ground, lakes and rivers, and an area’s climate all influence permafrost conditions.

Pingos and ice wedge polygons are two other notable formations that occur in the presence of permafrost. A pingo is earth-covered ice in the shape of a mound and is usually about the size of a small hill; most small pingos have rounded tops, while larger pingos may have breaks in their tops, or even small freshwater lakes if a crater was formed. Ice wedge polygons begin as a small crack in the soil of permafrost. As overlying snow melts, water fills in the crack, and expands as it freezes. The cracks grow in size until they begin to push surrounding soil up, creating polygons. Eventually, these ice wedges can create pingos, after very wet soil buried below the active layer is compressed to the point at which it pushes upwards.

There are numerous indicators of the effects permafrost and seasonally frozen ground have on an area. Many communities that live in regions affected by seasonally frozen ground are aware of the stress placed on roadways and other infrastructure by the freezing and thawing of soil. Frost heaves are a good example. When water trapped underground freezes, it expands, pushing surrounding material upwards. This force is powerful enough to create hummocks, or raised areas of ground, beneath roads and other structures. Once the soil thaws, the underlying material is disrupted, often times causing potholes and large cracks in pavement.

Some regions that were once covered with permafrost are warming in the Arctic, allowing soil to thaw and causing damage to infrastructure that was built entirely on frozen ground. It is not uncommon for buildings or houses to be moved or rebuilt because of changes in the ground beneath them, particularly those located on the coast. Where sea ice and permafrost used to work to protect the shore, warming has reduced both fast ice (ice connected to the shore) and permafrost extent, sometimes resulting in chunks of land being washed away to sea. Man-made objects are not the only features affected by thawing ground. Drunken forests, or forests where trees lean at odd angles, are common in areas where permafrost has recently transitioned into only seasonally frozen ground.

Recent studies have begun to address the tons of carbon dioxide, methane, and other greenhouse gasses that are buried within permafrost. The current estimate on the amount of carbon stored in permafrost is around 1,400 gigatons—almost twice what is currently in the earth’s atmosphere (K. Schaefer, NSIDC). Yedoma, a type of permafrost that has existed since the Pleistocene period and is found mostly around Russia and Siberia, contains huge amounts of carbon that could be released into the atmosphere if it were to thaw.