Glaciers are formed over long periods of time by snow that is compressed into ice, gaining mass through snowfall and sediment deposition. Glaciers need perennial snow cover and below-freezing temperatures to retain mass, and therefore are found predominately at higher latitudes but also in high mountain ranges at lower latitudes, such as the Himalayas and Andes. When mass gain (snow accumulation) in the glacier’s accumulation area outpaces mass loss (ablation) in the glacier’s ablation area, the glacier is “surging” forward; vice versa, and the glacier is “retreating”.

The most well recognized types of glaciers are fairly diverse in appearance, such as piedmont glaciers (a steep valley glacier that flows into a flat plain, producing a bulb-like lobe) and tidewater glaciers (glaciers that terminate in the sea). However, other glacier types, such as mountain glaciers and hanging glaciers, can be more difficult to differentiate. Several prominent features are common on all glaciers. Crevasses, or giant cracks that form as the glacier flows, can be found on all types of glaciers. Moraines are long, colored stripes of rock and debris that are left behind by glaciers as they retreat.

Despite their massive size, glaciers are mobile; their sheer mass, coupled with ablation or accumulation, translates into motion that is usually described in meters per year. Some glaciers may hardly move over the course of a decade, while others, such as the Kutiah Glacier in Pakistan, have been recorded to surge as much as 360 feet per day.

Glaciers occupy about 10% of the earth’s surface and can be found in a range of sizes, from as small as 100 meters to as large as hundreds of kilometers in length. Other ice masses found on many of the Canadian and Eurasian Arctic Islands are called ice caps, which are defined as a dome-shaped ice masses with radial flow. Larger ice masses, termed ice fields, are found in Alaska and the southern Andes. They are characterized by ice thickness not sufficient to obscure the subsurface topography. According to the United States Geological Survey (USGS), average glacier thickness can be estimated at about half of the surface width of the glacier.

In many mountain ranges, glaciers provide a significant portion of runoff during the dry season, and so are vital for drinking water, irrigation, and industry. Most critical regions with vanishing glaciers are China, India, and other Asian countries, as well as the South American Andes (Barnett et al., 2005), with hundreds of millions of people affected.

Glaciers and glacial environments are sensitive indicators of climate change, and, in several mountain regions, important components of the hydrological cycle. In spite of the fact that glaciers and ice caps account for only 0.5% of the total land ice, their contribution to sea level rise during the last century exceeded that of the ice sheets. For the last three decades the vast majority of glaciers worldwide retreated; the average specific mass balance of all glaciers and ice caps for that period has been estimated at -265 mm/year, corresponding to 0.4mm/year sea level rise (Ohmura, 2004). It should be noted, however, that this estimate still carries significant uncertainty. 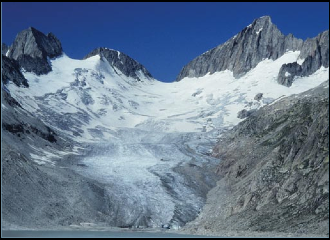 USGS Questions and Myths about Glaciers