The GCW surface observation network is comprised of a core component, called CryoNet, and contributing stations that are not part of CryoNet. The GCW network builds on existing cryosphere observing programmes and promotes the addition of standardized cryospheric observations to existing facilities in order to create more robust environmental observatories. The basic component of the GCW network is the station. A station measures one or more components of the cryosphere and one or more variables of each component, for example depth and density of the component snow. CryoNet Stations must meet a minimum set of requirements, which includes providing ancillary meteorological measurements. Potential attributes of CryoNet stations are given below. All stations will be either Primary or Reference, and may have one or more additional attributes.

A CryoNet Cluster1 generally encompasses an area greater than a conventional observing station and is comprised of two or more active GCW stations with varying capabilities that are operated as a coordinated unit. At least one station has to be a CryoNet station. A cluster may encompass several micro-climatological regions or extend over larger altitudinal gradients. Thus, further ancillary meteorological stations are part of a cluster. Different partners may operate the stations, but they are co-ordinated through one agency or institute. Each CryoNet cluster has to provide a concept describing the research approach and the cluster management (e.g. cooperation between different partners). CryoNet clusters must also meet a certain requirements.

Typically, clusters have a broader research focus related to the cryosphere compared to stations. Whereas simple clusters investigate the cryosphere only, integrated clusters aim to provide a better understanding of the cryosphere and/or its linkages to other components of the earth system, for example, the atmosphere, the hydrosphere, the biosphere, the oceans, soil, vegetation, etc. Potential attributes of CryoNet clusters are: 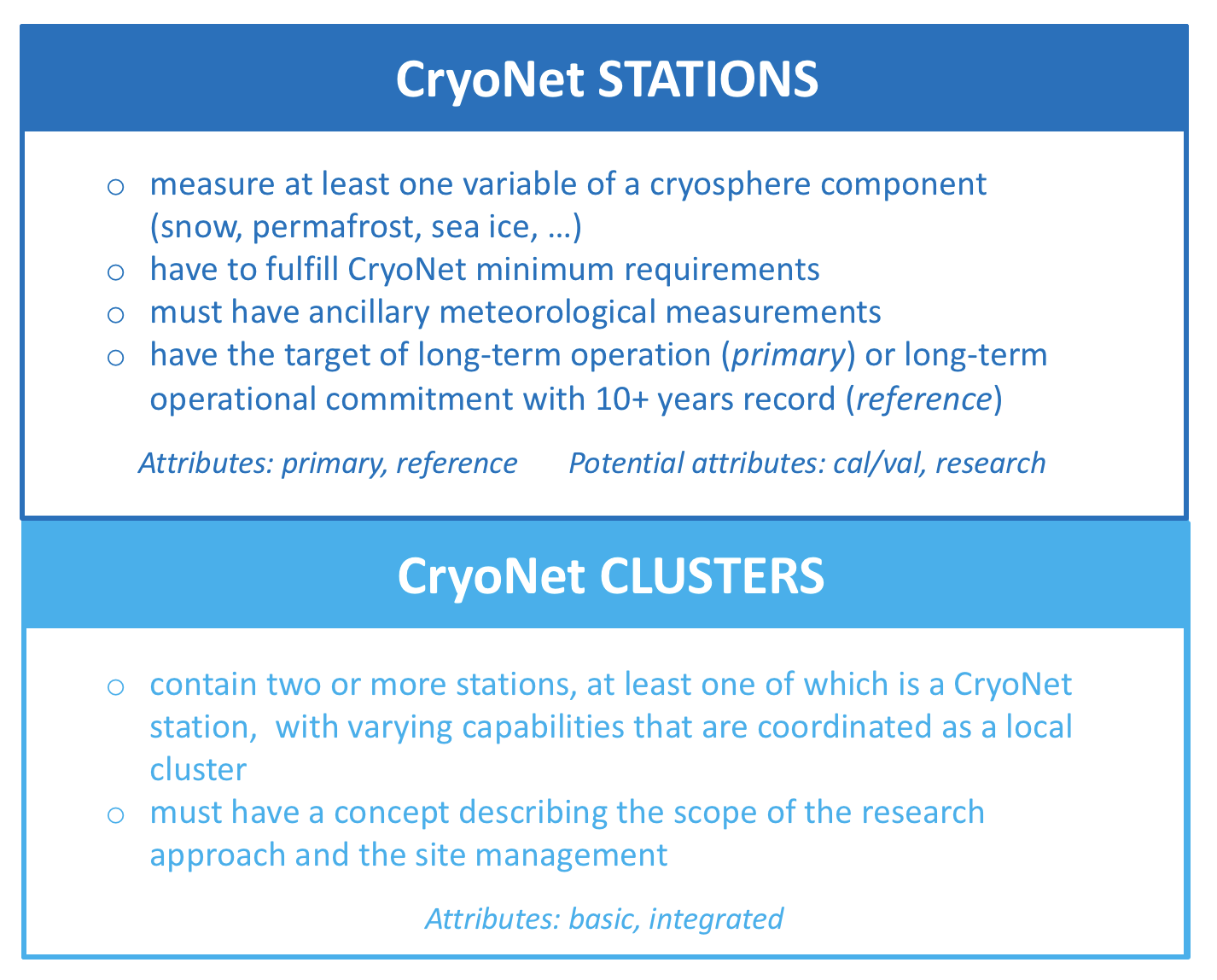 Synoptic/climate stations of the NMHSs measuring cryospheric variables to WMO standards, and providing their metadata and data via WIS and WIGOS, could fulfill the necessary requirements in order to contribute to GCW and to be accepted as stations in the GCW surface network.

1CryoNet "Clusters" were called "Sites" until January 2018. The terminology change was made to avoid confusion, as the word "site" is used interchangeably with "station" in some countries.